(Morning Star News) – Five members of an Iranian house church are missing after government agents arrested them on Friday (Aug. 26) without a warrant and took them to an undisclosed location, according to a leading advocacy group.

No information is available on the whereabouts of Ramiel Bet Tamraz, Amin Nader Afshar, Hadi Askary, Mohamad Dehnay and Amir Sina Dashti. Iranian Christians are fearful that the arresting officials have attempted to “force confessions” out of them to use as “evidence” against a central figure in the house-church movement, according to Middle East Concern (MEC).

The five men and their wives on Friday (Aug. 26) went on a fishing trip and picnic to Firuzkuh, 93 miles (150 kilometers) east of Tehran. At about 1:30 p.m. security officials from the Ministry of Intelligence and Security (MOIS) raided the picnic.

When Afshar asked to see the arrest warrant, which the officials did not produce, he was beaten, according to MEC.

Rob Duncan, MEC’s regional manager for Iran, said the arrest was “absolutely illegal” and alarming because it took place at a picnic and not a religious meeting.

“The fact of the matter is they were going on a fishing trip,” he said. “There wasn’t even any intention of having a prayer meeting or anything like that. There was nothing.” 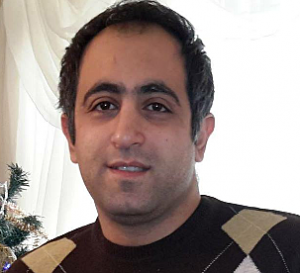 MOIS officials separated the men from the women and took the five men away. Family members have been unable to obtain information about their whereabouts.

One of the detained Christians, Tamraz, is the son of Assyrian pastor Victor Bet Tamraz, who was arrested along with other Christians at his home on Dec. 26, 2014 at a Christmas celebration. The elder Tamraz was informally charged with conducting evangelism, conducting illegal house-church activities and printing and distributing Bibles. He was released on bail on March 1, 2015 without ever being formally charged in court.

Afshar, arrested in 2014 along with the elder Tamraz, had been released on bail a month earlier. The two are expected to be summoned to court to face charges related to the 2014 arrests, and MEC representatives believe the government has subjected the five detained Christians to “severe” interrogation to force “evidence” out of them.

The five men join a group of 37 other Christians detained this month in a series of arrests across Iran of Christians involved in the country’s burgeoning house-church movement, according to human rights and religious freedom advocacy groups.

The first raid this month happened on Aug. 12 in Isfahan, 279 miles (449 kilometers) south of Tehran, when armed plain-clothes agents broke up a worship service taking place secretly in a home. The agents arrested 11 people at the house and then rummaged through the building, seizing Christian books, pamphlets and satellite television reception equipment, according to the Human Rights Activists News Agency (HRANA).

Ten of the 11 detained Christians have been identified by MEC as Amin Ahanin, Mohammad Alyasi, Fatemeh Amini, Edmund Khachaturian, Mohammad Malek Khatai, Mohsen Khoobyari, Arash Qodsi, Hamed Sepidkar, Samaneh Shahbazi-Far and Maryam Zonubi. Human rights groups have not been able to obtain the identity of the 11th person arrested at the gathering.

As with the five arrested on Friday, the 11 are being held incommunicado at an undisclosed location, and their status is unknown. They were last seen being driven away in vans from the scene of the arrests, according to the HRANA.

On Aug. 17 in western Iran, another house church was raided, and nine people were arrested. MEC confirmed that several house churches in northern Iran were also raided within the week, and 17 people are thought to have been taken into state custody. For security reasons MEC was unable to release any other information about the Aug. 17 arrests, other than to report that they appeared to be connected in some way.

“They [Iranian officials] have gathered information that has linked people to different house churches and then swooped on all the house churches the same day to avoid a warning being passed on,” Duncan said.

He added that since June, the number of arrests of house-church members has increased significantly.

“We can only guess the motivation behind the raids on house churches, but it is relentless,” he said.

According to the U.S. State Department’s 2015 International Religious Freedom Report, released Aug. 10, “Christians, particularly evangelicals and converts, continued to experience disproportionate levels of arrests and high levels of harassment and surveillance, according to reports from exiled Christians. Many arrests reportedly took place during police raids on religious gatherings, during which the authorities also confiscated religious property.”

After last month’s beating of Christian convert Ebrahim Firoozi by prison guards, his elderly mother implored authorities to release her son. Firoozi’s mother, who is almost blind, told Iranian authorities that she has no one to assist her through her disability. She also said that because she is almost blind, she is unable to visit her son in prison or go to his hearings.

Prison guards on July 13 beat Firoozi and forcibly took him to a court hearing. A prisoner in Gohardasht Prison in Iran, Firoozi, was summoned to the appeal hearing but refused to go because he thought his lawyer was to allowed to attend in his absence. When Firoozi was brought to court, one of the judges in the case was absent, and the appeal hearing was postponed.

A welder from Robat Karim, 25 kilometers (16 miles) southwest of Tehran, Firoozi has been under the scrutiny of the Iranian security apparatus since January 2010, when he was arrested for leaving Islam and hosting religious meetings. A Revolutionary Court convicted him of creating “propaganda against the state” and sentenced him to 10 months in prison, of which five were suspended.

He was released on June 8, 2011 but then arrested again on March 8, 2012. Charged with creating “propaganda against the state” for allegedly trying to create a website about Christianity, he was sentenced to one year in prison and two years in exile.

On Sept. 16, 2013, Firoozi was arrested a third time, and in April 2015, a judge in Branch 28 of the Revolutionary Court sentenced him to five years in prison for “creating a group with the intention of disturbing national security” for his role in organizing Christian meetings and conducting evangelical work.

Firoozi appealed but waited a year for July’s hearing. During that time, he has been denied access to religious books, even though the books he requested were published with the permission of the Culture and Islamic Guidance Ministry, according to the International Campaign for Human Rights in Iran. His next hearing is set to convene in November.

The whereabouts of three Christians from Azerbaijan arrested in Iran still remain unknown. According to MEC, Eldar Gurbanov, 48, Yusif Farhadov, 51, and Bahram Nasibov, 37, from Word of Life Church in Baku all went missing on June 24 after security agents raided an engagement party in Tehran and arrested about 10 people. Most of those arrested were released, but the three along with an Iranian Christian who was with them were detained. Their location is still unknown, but they were able to contact their families once or twice, despite being confined in solitary holding cells.

Iran Suspected of ‘Forcing Confessions’ to Obtain Evidence Against Church Leader added by Editor on August 30, 2016
View all posts by Editor →