Indian Christian Teen Stabbed and Stoned to Death for His Faith The mutilated body of Sambaru Madkami was found on Friday, buried in the jungle of Malkangiri, about six kilometers (less than 4 miles) from his village of Kenduguda, Malkangiri District, Odisha state. The village animists had seized him on Thursday night after deciding to kill the male heads of the three Christian families in the village, area sources said.

“They had come for me,” Sambaru’s father, Unga Madkami, told Morning Star News, “but I was not at home. I had taken my daughter who was sick to the doctor.”

Living at home instead of the hostel of his school in Bhejaguda because of a COVID-19 lockdown, Sambaru had been leading daily meetings of a house church whose founding pastor, living in another town, dared to appear only twice a month due to villagers’ growing opposition. The only three Christian families in the village of 210 families met at Sambaru’s house.

“Sambaru knew the Word of God the most from among us,” his cousin told Morning Star News. “So he was the one who led us in a time of prayer and learning from the Bible every day in his house.”

Some seven to 10 villagers came to his family’s home at about 11 p.m. on June 4 and called for his father, said an area resident whose name is withheld for security reasons.

As Sambaru’s father was staying overnight at a relative’s house en route to the hospital several miles away where he was taking his daughter for treatment, the villagers abducted Sambaru, the source said.

“They took him a few meters further, where a huge mob was waiting for him,” the eyewitness told Morning Star News, translated from the tribal language by an area pastor. “They tied his hands and started to beat him.”

The assailants then went to the house of Sambaru’s cousin, like his father also named Unga Madkami, and called for him, but his wife stopped him from going out and urged him to run for his life toward the jungle, the cousin told Morning Star News.

The attackers then called out to the third Christian male targeted, 18-year-old Sukka Padiami, who jumped out his back window and fled toward the jungle.

“Both I and Sukka ran all night across the jungle,” Sambaru’s cousin told Morning Star News. “We ran for almost 20 kilometers [12 miles] and then called our pastor, who directed us to go to his friend’s house, and we took refuge there.” 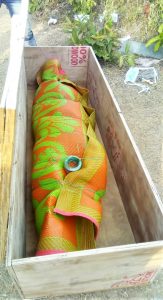 “The villagers were instigated to attack the Christians at the behest of Hindu extremists,” said area pastor Bijay Pusuru, a close friend of Sambaru’s family.

The assailants dragged Sambaru six kilometers from the village to the jungle, “completely” ripping off the skin on his back, Pastor Pusuru said, citing information from an autopsy report.

Sambaru’s village house church pastor, Inga Madkami, said information from police and the autopsy report indicated the assailants broke the young Christian’s legs and hands, put him in a sack and stabbed him with a knife.

“Several knife stabs are visible on his back, we were told,” Pastor Madkami said.

The autopsy indicated the assailants untied the knotted sack, tore open Sambaru’s mouth from both sides and smashed his face with a huge stone, the pastors said.

“His eyes, nose and face were not visible,” said Pastor Pusuru, sobbing. “It was all smashed.”

The autopsy indicated that the killers then struck the back of Sambaru’s head with a stone before slitting his throat, the pastors said.

“They dug a shallow pit and put his dead body there and covered it with mud and leaves,” Pastor Pusuru told Morning Star News.

Police arrested six people after Sambaru’s cousin filed a complaint, and two of the suspects, Deba Madkami and another whose identity is unclear, confessed to the kidnapping and murder and led officers to Sambaru’s body, according to Inspector Ram Prasad Nag, the investigating officer who is also Station Head Officer of the Malkangiri police station.

“At the confession of two of the arrested, we were able to trace Sambaru’s mutilated body,” Nag told Morning Star News. “We are still in the process of investigation, and with new facts surfacing, the sections of the FIR [First Information Report] are being changed accordingly.”

Police found Sambaru’s body at 7 p.m. on Friday (June 5) but didn’t recover and transport the body away until the next morning. After the autopsy, Sambaru’s family buried his body at a funeral service officiated by Pastor Pusuru on Saturday (June 6) in the deceased’s native Kenduguda, under police supervision at 9 p.m., Pastor Madkami said.

Sambaru’s cousin stated in his police complaint that Sambaru was abducted and killed for his Christian faith, but those arrested told officers that they killed him because he and the other targeted Christians were practicing “black magic,” according to Nag.

“In the last few weeks, 15 people have died due to various reasons in the village,” Nag told Morning Star News. “Some had swelling in their hands and legs; the villagers were suspecting Unga [Madkami, Sambaru’s father] to be involved in black magic and witchcraft.”

Sambaru’s relatives roundly denied the allegations, reiterating that the motive for the killing was, in the words of one, “purely our Christian faith.”

“Killing Sambaru was not enough, the villagers gathered together [on Friday, June 5] and decided to kill all the members of the three Christian families,” Pastor Pusuru told Morning Star News.

All members of the three Christian families had to lock their homes and flee from the village, he said.

“Villagers the next day looted one of Sambaru’s pigs and two quintals [about 440 lbs.] of rice from his house and went to the jungle, where they cooked the pig and the rice and celebrated ‘Odia Bhoji’ [a festival showcasing food from the Odisha state],” he said.

Local media have repeated the false allegation of “black magic” as the motive for the killing, which in the minds of many villagers justifies horrific murder.

Pastor Pusuru said contaminated drinking water led to the recent deaths in the village, as local news channels had reported prior to the killing. The accusation of Christians practicing black magic as the cause of the deaths was later fabricated as an attempt to justify the killing, he said.

Vijayesh Lal, general secretary of the Evangelical Fellowship of India (EFI), said his heart grieves with the family.

“The manner in which Sambaru was killed was most gruesome,” Lal told Morning Star News. “A promising young life was snuffed out because of the hatred that seems to have permeated the very soul of this nation, seeping into the very grassroots.”

The attempt to shame the victim evident in made-up stories of witchcraft is an indicator of the hostility that persists against the minority Christian community in India, he said.

“I know that Sambaru’s sacrifice will not be in vain – only God can bring good out of it, and my prayer is that He will,” Lal said.

Pastor Madkami, 27, who began visiting Kenduguda in 2018 and was leading Sunday and Friday fellowships in Sambaru’s house, said villagers had threatened him many times, telling him to stop visiting their village for prayer and fellowship.

“They planned to attack me several times, but somehow God saved me,” Pastor Madkami told Morning Star News. “I used to be very scared to go to their village. Though our scheduled meetings were on every Sunday and Friday, there were months when I only went twice a month on Fridays, fearing attack from the villagers.”

The church would worship silently, refraining from singing, and he would visit for only 30 minutes and leave immediately, he said.

“The complete village was against the Christian families and threatened them every now and then, trying to force them to leave Christianity,” Pastor Madkami told Morning Star News.

For his part, Pastor Pusuru said he had complained twice at the Malkangiri police station about rising threats against the Christians in the village, without effect.

“At such a young age, Sambaru had great zeal for God and for ministering to God’s people,” Pastor Pusuru said, in tears.

“Sambaru was my church youth leader,” he said. “He was selected for children’s ministry as well. He would minister to the children whenever he came to my home church.”

Shibu Thomas, founder of advocacy and aid group Persecution Relief, said the murder has exposed the mentality and attitude of religious fanatics today.

“This by far has to be the most disturbing case of Christian persecution that I have encountered in the past four years,” Thomas told Morning Star News. “I am dumbfounded at the brutal nature of the crime.”

Dibakar Parichha, secretary for the Diocesan Commission for Justice Peace and Development from the Archdiocese of Cuttack-Bhubaneshwar, said it is not acceptable that such crimes continue to happen during the coronavirus pandemic.

“The government should take the toughest action towards the perpetrator of the crime so that peace can be brought to the locality,” he said.

Lal said EFI’s Religious Liberty Commission has chronicled at least 10 incidents of persecution against Christians in Odisha state this year.

On June 11, two lawyers from the Human Rights Law Network visited Sambaru’s family, as well as the two other targeted Christians, and recorded their statements. The HRLN team aided by local lawyers expects to petition the High Court of Odisha for a high-level inquiry into the case.